It has been quite some time since I’ve posted any new ideas or content on this blog. I have been meaning to do more, but music has been the sole outlet of my creativity and spare time in the last year or more, which is a good thing! But I’ve got so many things on my mind I want to write about. First of all, thank you for making Steelonious such a success! If you haven’t heard it yet, check it out. The CD has been so well received and there is a lot of steel guitar on it.

With this posting, I wanted to share a little something from Steelonious, which I released in 2016. In case you’re not familiar with it, it was a program of Thelonious Monk melodies arranged as Instrumental/Pop/Jazz tunes in varying contexts, all reflecting the steel guitar–its history and its possibilities. Basically, I connected the dots of things I love. In this particular arrangement, I used techniques I learned from studying the playing of Sol Hoopii and also a lot of 60s pedal steel guitar. The choice of groove reflects my passion for New Orleans music, and I borrowed some chord changes from a Bruce Hornsby/Christian McBride/Jack DeJohnette version of this tune that kills me. The original song form is a 12 Bar Blues, which on occasion is how we perform it. But what I really wanted was to get some of that funky country type picking in this tune, especially the solo. I’ve always been a fan of the music of Little Feat and maybe that is reflected here.

One of the things I discovered about Sol Hoopii’s playing years ago was his use of open strings as passing tones. Sometimes they are chromatic, sometimes just scale tones, but they lend a rhythmic articulation in times when the line really begs for it. Dobro players are no doubt aware of this technique. But I’ve found that one the most difficult aspects of playing steel guitar is to play chromatic lines that are more than just two or three notes–the articulation really tends to be a crap shoot and sometimes you need it to be clean and popping. So, I’ve adapted this technique into my playing and this arrangement of Straight, No Chaser is one of my most successful uses of it.

I changed the key of the tune from Bb to A to accommodate the idea, then I just worked on it and worked on it until it developed into something cohesive and right. It is really not difficult to play, but takes a lot of practice to play it consistently. There is a lot of pick blocking going on, which I just tend to do unconsciously now. The tuning here is C6 and 6 string C6 will work just fine, as you really only use strings 2 through 5 (C-E). 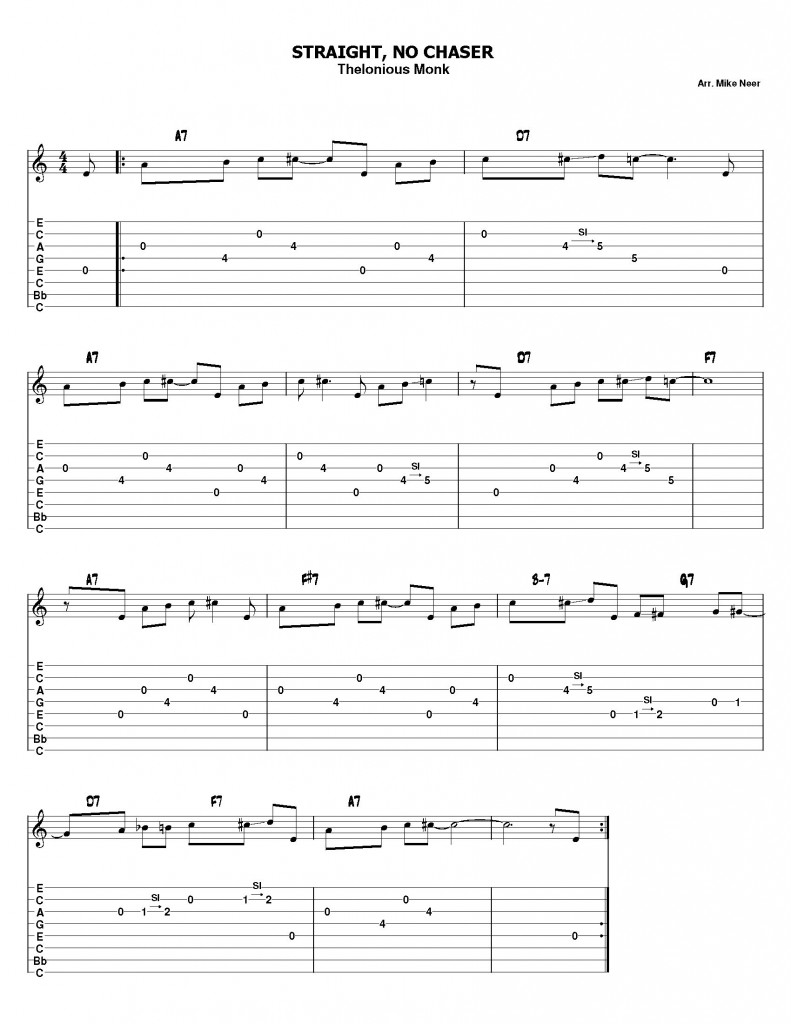 If you haven’t heard my version from Steelonious, it is available for purchase here at Bandcamp as a single track: Bandcamp
The track is also available at Amazon, iTunes and CD Baby. CD Baby