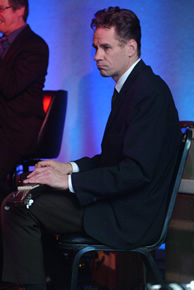 M: There is a pretty good scene in Portland, right?

H: Yeah, there’s a big acoustic scene here—it’s more old-time Country music, Bluegrass is really big. There are a lot of young people interested in playing traditional music. I met this guy, Doug Sammons, who was a Bluegrass player and he wanted to bridge the gap between old-time Country and Jazz, like Jimmie Rodgers did. So we started working on that and about 6 years later we’ve got 3 CDs (The Midnight Serenaders). Now it’s time for me to move on.

M: You mentioned to me that you are now interested in learning to play the tres….

H: I’ve always wanted to know something about Latin music but all the stuff I heard I was put off by, which I think was more of the later music, like Salsa—once there’s a bunch of horns in it and timbales and congas and percussion, it just doesn’t do much for me. Matt Munisteri sent me some CDs of Puerto Rican string bands, so hearing the Cuban and Puerto Rican string bands of the ‘20s and ‘30s is the most interesting thing I’ve heard in the last couple of years.

M: I’ve always had a deep connection to Latin music. I’m 1/4 Spanish and I can remember as a kid seeing my grandmother and her sister listening to Mariachi music and other Spanish music all the time. They lived in the same house, and they had the velvet paintings of the matadors. [laughs] I feel close to that music when I hear it.

H: It’s totally amazing—I wish I’d heard it sooner. All that Cuban Son and even Changüi—that is some of the weirdest music I’ve ever heard, the rhythms. Once I started hearing the tres and how it fits in a band…I love the fact that you can just do whatever you want to do. They’re just soloing over the entire tune.

I wish I was interested in this music back when I was living in New York. Mario Hernandez is kind of the guy I freak out over and he was in New York that whole time.

M: Obviously, your desire to stretch and learn these different styles of roots music extends a bit beyond what the typical musician who transitions into roots music does. The stuff you’ve gotten into is a bit more sophisticated and even exotic….

H: Well, I’ve always just kind of followed my heart. And that’s always led me to good places. It doesn’t always seem to make sense. I mean, I quit a band that was touring the world and I was making a decent living and I didn’t have to wake up at 7 in the morning and trudge off to work in the rain. But what I really wanted to do was putz with the steel guitar and see where that led me. It was a tough decision, but it was definitely from my heart. The same with the Cuban stuff; it just the music that’s moving me and what I’m listening to and I pick up the tres 100% more than I pick up my steel guitar.

A lot of people who are making a living playing a certain style of music don’t have the freedom to just go off and do something completely different. I’ve never relied on music to pay the rent. Playing music like this, it’s hard to make a living unless you hustle and that’s not me. It’s hard for me to play with pick-up bands and read charts—most of my solos that sound good are worked out in advance.

M: There’s nothing wrong with that, they’re still your ideas….

H: I would say they are musical ideas but I would say that it’s been a big frustration for the last 7 -8 years by not knowing the notes and the math of music. It’s really held me back in terms of playing better and playing an actual solo that sounds like you’ve got some ideas in it instead of just treading water.

M: I’ve always advocated for learning all that stuff, but it’s not for everyone and obviously there’s a lot more to making music than just that. There are some people who really ‘get it’ in other ways.

H: For a long time it didn’t really bother me, but the second half of my steel guitar career, it’s definitely held me back and I’ve got a lot more respect for people who do that. I didn’t rebel against that stuff; I wanted to know it. But it seemed like it would go in one ear and out the other. I’ve spent hours and hours and hours thinking about it, wondering “How could some guys get really good and some guys don’t?” Being lazy also is a big part of that. [laughs]

M: I sat in my classes in school writing out all my scales and chords instead of paying attention to the teacher….

H: I’m sure I would be a much happier musician if I had more of that kind of stuff….

M: Well, I kind of wish I would have spent more time paying attention to the English and Math—I’d probably have a good job. [laughter]

The Moonlighters – Twilight In Flight

When David Hamburger suggested that you check out some Hawaiian music, you didn’t have anyone to say, “Here, check this stuff out!” You had to go out and hunt for it yourself?

H: I guess I should mention I got to sit down with Jerry Byrd for an hour. When I was still in Helmet, we played in Hawaii and I somehow finagled his phone number from this guy at Harry’s Music. So I called him up a month before I was going to be there and said, “I’m on tour and I’d love to meet you,” and I talked him into an hour lesson. Probably the biggest thrill of my life–because I was still at the peak of my Jerry Byrd fan worship.

I walked in there and he was leaning against this glass counter, with a big Panama hat, tacky Hawaiian shirt. He goes “Follow me,” and led me down to this tiny little space–an ancient Ampeg amp–we both plug in and he says, “OK, Henry, why are you here?” It was a total thrill. I could barely play at the time.

I will say this about the lesson: I had this little tune–I could kind of get through it, but he wouldn’t even let me get past the third bar. He was just like, “No, no!” I’d play a note or two and he’d say, “Nope, nope, nope. Not like that.” He was so into the music that all those little minor things, all the great stuff happens between the notes–how you go into the next note, how you slide up to it, how you dampen it. He wouldn’t even let me play the tune and I thought that was so amazing. His skill level was so intense, he saw all the little minor things that even great players don’t pay attention to.

And he did help me with my slanting–I like to say Jerry Byrd taught me how to slant, which he really did. I was having a hard time with it. He said, “Think of it as a car turning around the corner. You don’t want to cut too close to the curb–you want to go out and then make your slant.” He also showed me how to keep my index finger off the bar, to arch my index finger and not have it flat on the bar. You want to keep just the tip of your index finger on the tip of your bar and push with your thumb against the rear of the bar.

Jerry was very good with writing letters. I would write him and ask what tunings he used on certain tunes and he would always write back. He told me to use E13 tuning–he didn’t like C#m7 tuning–he said it wasn’t very playable.

M: Did you get it from the liner notes of that CD?

H: Definitely. The 9th slant on the top 3 strings–that’s the shit. I can’t play without that. When I moved to Portland, I changed my tuning. I lowered it a whole step and changed some of the bass strings around which I wish I would have done earlier. My tuning is: D B F# D B A (hi to low). It made it a lot warmer. And much more playable.

One of the big drags about the instrument is that there weren’t a lot of people to talk to or take lessons from. If you play guitar or saxophone you can always walk down the corner and just watch somebody. You couldn’t just walk down the street and watch somebody play steel. It was a big drag to not to have a steel guitar buddy.

M: Do you think it’s ever going to take off again?

H: My gut feeling is that there seems to be sort of a peak right now. I don’t know why I feel that way. I think there’s definitely room for people playing and getting better…and even playing it in some sort of a modern context, in avant garde.

There are always guys that can play, but I don’t always hear people that pay attention to the feeling. That’s why I dug guys like Jerry Byrd so much. He really knew how to hang on to a note, which is what’s so great. Making all the music between the notes–that’s what this instrument does so well!